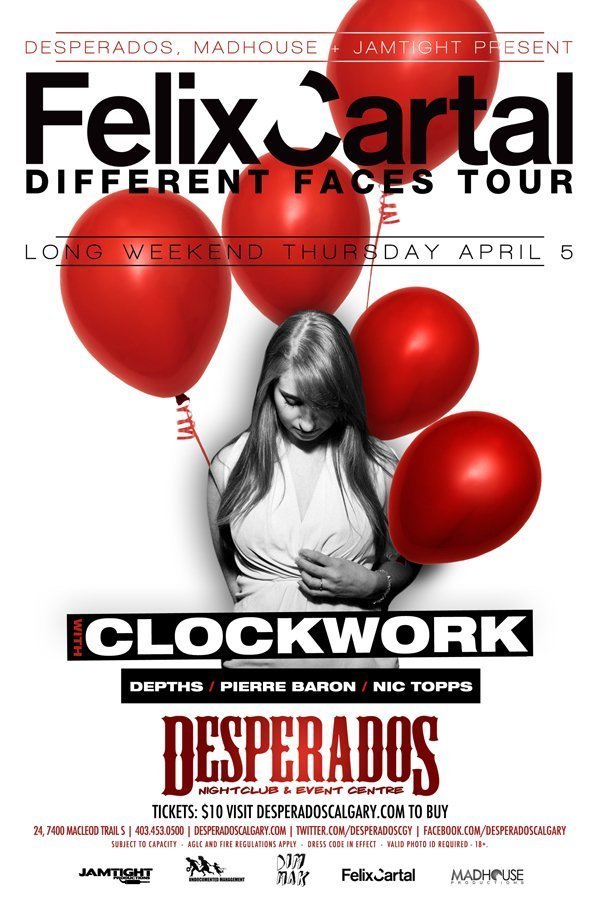 This promises to be THE EVENT of the long weekend so get your tickets early!

There’s no work Friday so let’s start the weekend in style with one the fastest rising stars in music. Stay tuned for rad drink specials and ticket giveaways!!

Advanced Tickets are only $10 in advanced.

Tickets may be sold at the door according to capacity but will cost more $$$.

(Join the MadHouse team and get FREE VIP Entry into all MadHouse Events! www.MadHouseProductions.ca/workwith for more info)

2012 marks an important year for Felix Cartal, as the first single off his sophomore album has demonstrated, his sound has matured into simply put: memorable music. This single, titled, “Don’t Turn On The Lights”, featuring a vocal from Ultra Music topliner Polina, has already garnered support from MTV, BPM (Sirius XM) and Muchmusic, who have all added the video and song into heavy rotation.

Not wanting to slow down, Cartal maintains an aggressive release schedule leading up to the drop date of his sophomore LP “DIFFERENT FACES” on Steve Aoki’s Dim Mak Records in late March 2012. The 2nd single, DOMO (out Feb7th), taps into aggressive sounds and Japanese pop culture, whereas the 3rd single BLACK TO WHITE (out March6th and featuring Miss Palmer), falls back onto the pop influences of the first single. Branded with cute girls, b&w photography and red balloons, the concept for the album is strong, consistent, memorable.

Growing up in Vancouver, Felix’s initial mark on the dance scene was with his debut EP in 2009 titled ‘Skeleton.’ Steve Aoki and MSTRKRFT were some of the earliest supporters of Cartal’s sound, and he released his debut LP ‘POPULAR MUSIC’ on Aoki’s label, Dim Mak Records. The record featured several big tunes such as, ‘LOVE’ which was featured on the I LOVE TECHNO 2010 compilation, ‘WORLD CLASS DRIVER,’ which startled the internet with the video’s shocking take on seniors amongst the drug scene, and ‘VOLCANO’ which featured vocals from an unlikely collab of Johnny Whitney from post-hardcore stars The Blood Brothers.

In 2011 Felix progressed his sound with a surprise hit ‘THE JOKER,’ which found its way into the sets of anyone from Benny Benassi to Diplo to Laidback Luke. Transcending across all scenes of dance music, this tune was remixed by the likes of John Dahlback and Clouds (TURBO), and helped push Felix into both the American and European festival circuit, seeing him on stages at EDC, Tomorrowland and the mainstage of Electric Zoo.

After that full year of relentless touring, Cartal returns to what he loves to do, which is create full albums, and DIFFERENT FACES does not disappoint. A balance of instrumental and vocal tracks keeps the record interesting and energetic. Enlisting the vocals of Sebastien Grainger of DFA1979 and Maja Ivarsson of The Sounds, Cartal continues his trend of collaborating with unpredictable vocalists in the dance scene. The product sounds effortless though, a mix of different ideas, made for different ears on different faces.

A few works about our friend Clockwork:

Los Angeles-born, New York City-based DJ/Producer Clockwork is no stranger to the world of electronic music. The young producer was one of the many 18 year olds circulating the dance music blogospehere with various bootleg remixes. But in 2011, armed with support and guidance from fellow young guns Felix Cartal and AutoErotique, Clockwork emerged from the throng of bedroom producers. His single “Squad Up”, an original track that was played out at festivals around the world, quickly caught the attention of internationally renowned DJ, and Dim Mak chief, Steve Aoki. Aoki signed Clockwork immediately, making him the youngest artist ever signed to Dim Mak’s prolific roster. Since the signing, Clockwork has officially remixed work for artists across the dance music spectrum, from Steve Aoki to Dimitri Vegas. His bootleg remix of Avicii’s notorious big room anthem “Levels” reached over 80,000 plays on Soundcloud, 2 million views on Youtube, and garnered international radio play.

Clockwork’s distinctive bass-heavy, big room sound has helped him gain support from the likes of Tiesto, Steve Angello, Laidback Luke, Steve Aoki, and everyone in between. His DJ sets are always as high energy and innovative as his productions, helping earn him an upcoming international tour as well as a spot on the line-up at the 2011 Hard Haunted Mansion Festival. With 2011 emerged the unique, big-room sounds that define Clockwork, but it truly is just the beginning. With a prolific propensity to create, a progressive production style, and a genuine love for the performance, Clockwork’s future is looking bright.