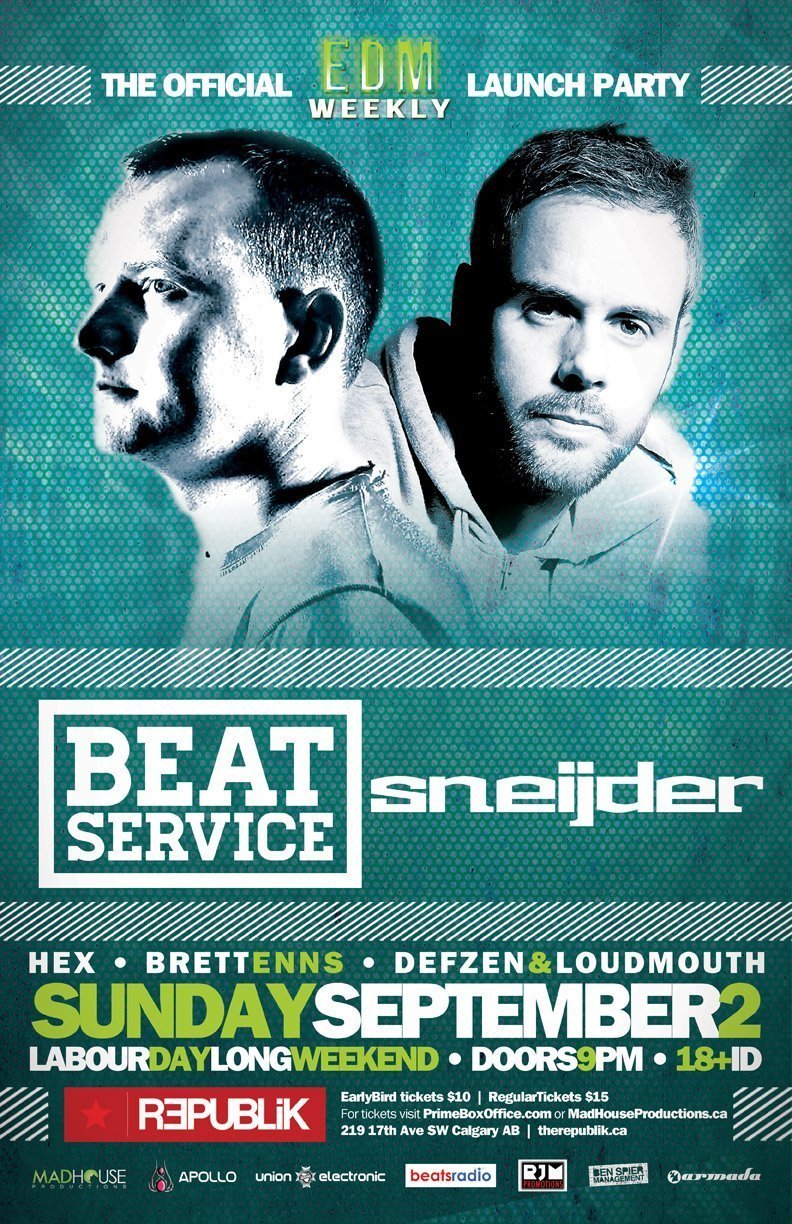 MUST SEE TRANCE EVENT OF THE SUMMER!

Due to Desperados closing down, we have changed the venue for this show to the Republik Nightclub!

~~ NOTE ~~
ALL TICKETS THAT SAY “DESPERADOS” ON THEM WILL STILL BE HONOURED AT THE DOOR!

More $$$ @ the door (door tickets only sold according to capacity)


(Join the MadHouse team and get FREE VIP Entry into all MadHouse Events! www.MadHouseProductions.ca/workwith for more info)

While he belted a string of Top ten hits on the Beatport Trance Top 10 with “Outsider”, “Charged”, “Cut and Run”, “Not Out”, “Waiting For The Sun” ” and “But I Did”, Beat Service also remixed some of the major forces of the scene: Markus Schulz, Susana, Aly & Fila, George Acosta, Lange, Rex Mundi, Signum, Moonbeam all the way to UK number 1 single “Infinity” by Guru Josh!

His music supported by all the major players Armin van Buuren, Tiesto, Ferry Corsten, Above and Beyond and Markus Schulz reflected in the fact that Beat Service has released his records on some of the hottest labels out there Anjuna, Enhanced, Black Hole and Armada. And as if that wasn’t enough Madis has launched his own Record company Beat Service Audio late 2011 connecting all the elements of his work into one! Plus Beat Service Sample CD/ Construction Kits is soon to be released by Future Loops.

2011 also saw the international rise of Beat Service as a DJ touring and showcasing his music all around the world. But this is just the beginning as for 2012 Beat Service promises one release a month on his own label BSA while constantly producing for other labels as well… The future’s so bright he’s gotta wear shades!

Lots of new productions are lined up for 2012 and it promises to be the biggest year to date!


************************
Sneijder
************************
Sneijder Hails from Ireland, which over the past few years has been seen by many to be right at the forefront of electronic music. In the relatively short time Sneijder has been producing he has made what can only be described as massive ripples within the trance world. After some years as a club DJ, Andrew Liggett as he is known to his close friends decided to take his career to the next level and in Early 2009 he began to build a small studio and begin the long journey of mastering the art of music production.. After months of hard work, reading and browsing forums for tips, Andrew finally completed his first track and also decided on an artist name. Sneijder’s debut track ‘The Phuture’ was completed in August 2009 and Andrew began to promote the track by sending it to a few A-List dj’s. The response was amazing and the track was heavily supported by John O’ Callaghan, who included the track on his first Subculture compilation and received airplay on Armin Van Buuren’s A State Of Trance Radioshow and Tiesto’s Clublife. The Phuture was signed to Goodgreef Digital and received massive support from Armin Van Buuren, Gareth Emery, Tiesto, Paul Van Dyk, Eddie Halliwell and many more.. Soon After remix requests started to come in fast and Sneijder completed remixes for Joey V and for Mandy Reid’s new track Anticipation on Spinnin.
2009 had really ended on a massive high for Sneijder and he had well and truly caught the production bug. Hard at work in the studio in 2010 he started to push elements of his more uplifting trance sound and his first uplifting outing came in the form of ‘Warsaw’. Warsaw was immediately picked up by Infrasonic Records and was hammered by Ferry Corsten and Armin Van Buuren on both dj’s radioshows and in their live sets. Sneijder decided that 2010 was the year to really push his name out there and that’s what he did!, Sneijder’s next track ‘Away From Here’ was snapped up by Paul Van Dyk’s Vandit records and quickly became one of the most talked about tracks of the year, featuring on countless compilation albums and heavily supported by Armin Van Buuren, Above & Beyond, Paul Van Dyk and many more. The track was accompanied by an amazing remix from Russian producer Arty and when released climbed the Beatport charts and made it into the top ten. Later that year Sneijder released his debut vocal track with American vocalist Elsa Hill on Monster Tunes. ‘We Are Living’ was released with 2 mixes both from Sneijder and also hit the top ten on Beatport. 2010 was already shaping up to be an unbelievable year, when Sneijder was asked to remix the new Giuseppe Ottaviani release for Vandit, The track titled ‘Ready’ and featuring the beautiful vocals of Emma Lock was released on Vandit and Sneijder was pleased that his name was included as part of the already outstanding remix package including Walsh & MC Auley, Maarten De Jong & Sied Van Riel.

Finishing of the year Sneijder still had time to work on some remixes and start his own ‘Distant World’ radioshow. Fellow Irish trance producer Bryan Kearney launched his own Kearnage label and Sneijder was asked to remix his track ‘I’ve Had My Fun’ which received support from the likes of Sean Tyas & Simon Patterson to name a few. On the gig front 2010 seen Sneijder Play Irish Superclub LUSH! Supporting Aly & Fila and play Irelands biggest dance festival Planetlove for the third time. Always looking to take his sound to the next level Sneijder also debuted in Poland and played various club nights up and down the country. Rounding of the year Sneijder made his mark on Cesar Lugo – Elapse for Vandit, again receiving big A-List support. 2010 has been a mind-blowing year for the Irish talent, receiving 2 beatport top tens, his tracks being featured on over 25 compilation albums and ‘Away From Here’ voted #138 on Armin Van Buurens A State Of Trance end of year countdown to say it has been a good year is an understatement. Sneijder was also named by John O’ Callaghan as a future trance star in various interviews and speaking on his Subculture radioshow he expressed his admiration for his skills by saying ‘’I’m Tipping this guy to be massive!’’
Now we are here in 2011 and Sneijder shows no sign of holding back. In March Sneijder releases his second E.P. on Paul Van Dyk’s Vandit and already his release Schedule is filling up fast. His Distant World radioshow on Afterhours.fm has now been extended to a new 2-hour edition, featuring the best in upfront trance and progressive.

Tipped for big things and named by John O’Callaghan himself as his ‘Breakthrough Producer’ of 2011 in his dj mag interview, the future looks big for the Irish talent.
Sneijder is a diverse talented producer who’s energy, commitment and versatility shines through both in the studio and behind the decks. So be sure to check out his sound coming to a club night near you!